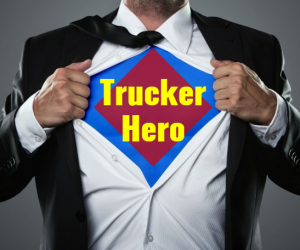 A truck driver trainer and his student showed extraordinary courage and heart when they came upon the scene of an accident. Due to their heroic actions, they helped save the life of a young child.

Ty Mauzerolle and his student driver Leonel Sanchez were on I-40 in Arizona with Mauzerolle at the wheel. The two were near Holbrook, Arizona, in the middle of the desert, when they saw flames casting an orange glow out into the night.

Mauzerolle hit the brakes and stopped just before two cars. One vehicle was in the left lane on its side. The other was near the right lane and on fire. Sanchez called 911 while Mauzerolle grabbed the fire extinguisher and ran to the flames. As he approached, he could hear the screams of a child.

“I knew we had to get this kid out of the car,” Mauzerolle told the Truckload Carriers Association, “but it was really mangled, and the doors weren’t opening.”

Mauzerolle wrapped the 9-10 year old boy in a blanket and carried him away from the car.

“I was on the ground with this kid in my arms,” recalled Mauzerolle. “A trooper arrived and said he would be happy to take over, but I didn’t want to let him go until he was put in an ambulance.”

The boy was in an enormous amount of pain and was screaming, but wouldn’t let first responders with a syringe full of pain medication near him. He kept asking for his father, the driver who was clearly deceased in the vehicle the boy had been pulled from.

“I asked him if he liked video games,” Mauzerolle said. “I told him I had a Nintendo Switch in the truck and that if he took the shot then he could have the game. This was the worst day in that kid’s life. I wanted to do anything to take his mind off what just happened.”

The boy was air evacuated to a Phoenix children’s hospital. It was determined that he had broken both arms, both legs, and at least one rib. He hadn’t been wearing a seat belt.

Mauzerolle later learned that the deceased driver of the other vehicle had been an elderly man driving the wrong direction.

“This wasn’t reckless driving,” emphasized Mauzerolle. “This was an accident. Anything can happen. It makes you appreciate what you have. The next day I called all my family.”

Mauzerolle and Sanchez weren’t the only truckers to stop and help that night. If details of this story sound familiar, that might be because William and Becky Gregory, a husband and wife team, were among those who stopped to help as well. Or it might sound familiar because when far-too-common fatal accidents like these occur, truckers like Mauzerolle, Sanchez, and the Gregorys somehow always end up rushing to give help where it’s needed.