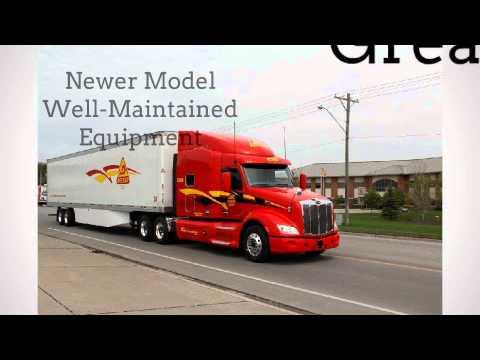 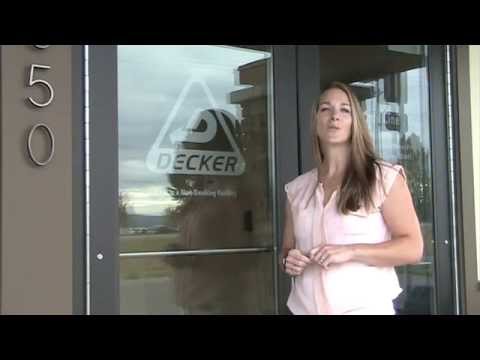 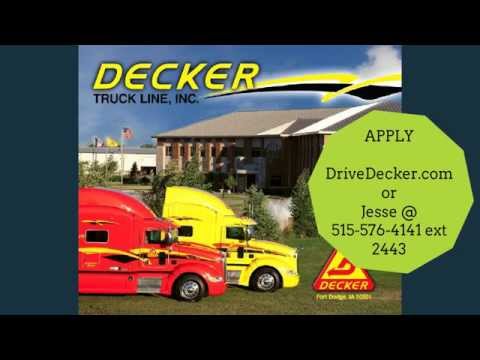 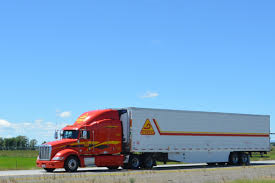 They griped at my wife for having company car over night. We weren’t even there. Just saw someone to blame and accused her. Screamed at her. She’s just a passenger seat in driver retentions eyes.

Pros
They have red trucks, you can make descent money but you can at other places too and possibly have way less headaches working at a less shady company.

Cons
They lie, manipulate, steal, screw, and will milk you for every thing they can get out of you. then they will kick you to the curb... look online for them being in court, there is more than a few times

Decker Truck Lines is the worst company that I have ever worked for... Just talk to other employees at the terminals, they all have such bad attitudes especially towards management that alone says a lot. they pump out drivers through orientation like its a sausage factory but are unable to retain them for more than a couple of months. They lie and manipulate the driver, and micromanage the crap out of you. they wont pay you for any mistakes they make, I talked to one driver who got billed for driving out of route, I don't know the details of that but still, from what I have seen and experienced over the past 2 years I wish I have never worker there, don't fall for there lies and gimmicks

Pros
Not a single thing about this company that I could call a pro.

Cons
Short miles on trips, late to home time, lots of sitting around waiting on loads, communication is done through texts with dispatch, almost impossible to contact someone over their phone lines, cheapest equipment I have ever seen, poor pay.

If your looking for the cheapest ride around Decker is the place for you, bad pay and on top of that they will give you runs that you can't be on time for then charge you the late fee. You will not be told about a load cancellation or the new load they have put you on over a phone call it will all just be text messages and it will get to you about thirty minutes later than it was sent due to their slow system. Repairs on your truck, well good luck I had a recap come off and drove on mismatched drives for three of the six months that I drove for this company, bunk heater stopped working in March never got fixed.

Pros
Being home every other weekend and good truck and trailer

Cons
Not making as much money as I would like for being over the road!!

I've been here for almost 2 months now . orientation was cool, nice hotel. I've got about 20 months experience now, I did reefer before I just switched over to flatbed. I definitely like the switch . But I did construction my whole life before coming to trucking so I like hard work. one of the main reasons why I came to Decker is because I could do a 4-day securement class instead of go out with a trainer. Also 1.5 days off for every week you're out .In 4 days you only learn the very Basics about securement and tarping ..it's a good thing I have common sense. If not, I would have been lost. They tell you that you get one and a half days for every week out but I work the southern flatbed division and you get home every other weekend for two days.. I haven't said anything about or push the issue about the three days for two weeks because I'm afraid if I did I would lose even more money. I have been getting over 2000 miles a week and running my clock down every week .. all in all it's an okay company but if I knew then what I know now about tarping I would have went with a company that paid more for that. Tarping and securement is the hardest part of flatbed, I guess that goes without saying so, the more you get paid for that the better it's going to seem to you. TMC or MILTON might have been a better choice for securement pay reasons. in my mind it's that big of a difference. Also ,trucks are automatic it takes getting used to. they take off very slow but they are nice up-to-date with fridges and APU.

Well, I'm in a hotel since my trainer is on his home time so I figured I'd share my experience so far. I graduated school back in April. Since I wasn't 23 tmc and boyd turned me down so I bounced between maverick, roehl, and melton for the longest. My friends dad has been driving for decker for last 3 years and has been doing well so I figured I would give it a shot and contacted a recruiter. Everything they told me sounded good on the phone although I still had my expectations low because I didn't know what to expect. They got me a rental car and off I went to Fort Dodge, Iowa. The staff over orientation did a pretty good job in my opinion. They shot it straight with you but they were still friendly and respectful. We had 15 guys that week and only 2 got sent home for medical reasons. And another guy decided that it wasn't for him. Out of the remainder only 3 of us were doing flatbed and the rest were reefer. At the end of that week those who had experience were issued trucks and assigned a load to get them home for the weekend. One of the guys who was flatbed had experience and got a brand new Pete with 3500 mIles on it. Me and the other guy had to do load securement training the following week for 3 days. I ended up leaving a day early that next week because they had a trainer come through the terminal and decided to let me go ahead and hitch a ride with him for the next 4 weeks. Lol. It also turned out that I was his first trainee. He's a really cool guy though. He set aside fridge, closet, and cabinet space for me for some of my stuff. I still have another 2 weeks with him but it's been a really good experience so far. I'm pleased so far with my decision coming to decker. They were honest with everything they told me over the phone and didn't lie about a thing to me. I'm not saying everyone may or may not have experienced the same thing, but they've been good to me thus far.

decker is the worst company, the only thing that I good I can say is the equipment. if you want good equipment with low pay join decker flatbed division, I worked for them 2 months out of my the Bessemer terminal it was a good experience from the people I met at orientation. the company side I can say this you learn from your experience. if you go on the website you will see that per diem that is included but it's out of your money. let me explain they paid me .44 per mile subtract .08 cent, I was making .36 per mile, and they the tell you you will get 2000-2500, my average was 1700 miles per week. if you want to good equipment with low pay decker truck line is the place for you.