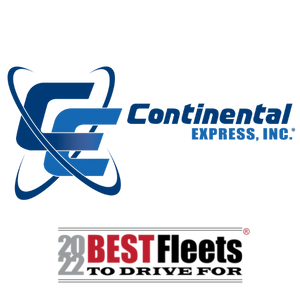 Share the salary you were paid at Continental Express

Been here about a year now and I am surprised how advanced the company is compared to past companies I’ve been with. New trucks, new office, cameras (I know a lot of truckers are skeptical about these, I was too but it saved me in an accident so I’m all for them now) and they are developing an app to replace Qualcomm. Pretty good home time and are flexible to work with as long as you have a drs note. But overall everyone I have talked to is super friendly.

I have been in the trucking industry for over 10 years and I have worked at continental for 3 of them. I think what seperates Continental from other trucking companies is that they care and give an honest effort. You cant say that about alot of companies. The hometime is good, but if you want to work they will work you. Everyone knows you by name and you can even talk to the owner whenever you want. Gettin about 2600 miles a week, mostly dropnhook. Equipment is top of the line. No company is perfect, there are good days here and bad, but you just have to hunker down and you will get through it.

Run ya tight and to the clock

driver facing cameras , clean trucks and trailers , trucks had problems with breakdown avg once a month but were safe and had a good heater system, very nice office people , payroll settlement very confusing but pay was there ,very nice terminal with shower facility and bathroom combined , customers were ok , assigned truck maybe shared with regional drivers when you go home , pay low 40's per mile on computer miles , some detention paid , paid holiday pay , bonus taken back out of check if leave before time and no compensation for passed dot , may be asked to run team loads to get your truck picked up in OH , cb provided but no external antennae allowed

they give you a job and are respectful , good private parking facility at FW terminal

4 weeks paid vacation per year, company owner on the premise. They show a genuine interest in their drivers and try to accommodate appointments and such. Best driving job in 15 years. They also have their own customers so no brokers to deal with.

I don’t really have any here

There are more minuses than pluses with this local company that have a few terminals around the South and South West.

The unions could do great things here if they were not over 100% on accidents with the CSA score and might be shut down soon.

Worked for them since spring on a few so called dedicated accounts but they really cannot be considered as such because it is a grab bag of what you will bring back. They insist you run OTR if your dedicated is not running which is again, a grab bag of crap. They expect the drivers to have no home lives, which in the 70s and 80s might have been fine but us younger drivers are not the old road dogs living in truck stops and cat houses.The pay is so so and off the dedicated it really sucks. The dispatchers do not listen to the drivers.

They also tell you when you hire in that if you leave without 5 days notice that they will deduct 100.00 for some fee but yet took 500.00 from my buddy and said it was the new rule that no one told him or I about. They waived mine as they informed me since he was the one they had it out for and hoped I would stay but understood that I would not do OTR.

In a nutshell just another crap company that while the maintenance is great, they treat the drivers like slaves to the grind then wonder why they have so many wrecking. They seem to use Craigslist as their advertising department if that tells you anything. I will be shocked if they survive the next round of the DOT coming in after their encounter this past spring.

My husband worked for Continental Express Inc in Sidney, OH for 2 months. They promised every weekend home. Yeah right. I admit he was home every week but for less than 24 hours. He told them a week in advance he was quitting and then the next pay he got it was less over $960. They said the truck was damaged and had to be fixed. The truck was like that when he got it and they didn't fix it then. The owner is rude and obnoxious. They run the drivers illegal every day. DOT has heard about it already.

i am currently an employee its true they want you to falsify logs expect you to pay for damage to trucks charge you 500 if u dont give weeks notice charge you 100 if u get shut down by dot iv been ther 4 weeks and id rather put a bullet in my head than do the required week but i have family stay away from this company unless you like to be abused.o and i get home less than 24 hrs a week average work day is 14hrs plus stay away!!!!!!!!!!!!!!!!!!

My husband lasted with them for about 3 mo. His every week home time that was promised would consist of him pulling in to the terminal at around 2am on Sat and was expected to be back by 3 pm Sun, just 13 hrs and off he went for another week of being lied to. He would only average around 1500 mi/wk, all kinds of things held out of his check, etc. He put his week notice in and was told to drop the truck off at the terminal at the end of the week, and after he cleaned it out to have the shop guy sign off that they had recieved it. Thank heavens we live in Sidney (that was the biggest reason he decided to go with this company, plus the promised home time), we loaded up the car, he cleaned the inside very very well, we took pictures and made copies of all of the signed paperwork showing they recieved the truck. Sure enough on his DAC they reported that he abandoned the truck under a load! When he called the company to discuss the issue they tried to fight him on it until he informed them of all the paperwork we had copies of. It was amazing how quickly they backpeddled and said it would be changed "right away". Sure enough they proved themselves to be liars yet again as it showed up on his DAC just this past month, well he carries his paperwork with him and was able to show this new company that Continental was lying and the new co. hired him.

I worked for these clowns back in 98. Russ was abusing drivers then. We would have to hire a lumper if the lumper wanted 80.00 he would pay 45. take the difference out of the drivers pay. I worked there 1yr then gave him 2wks he fired me . Went to unemployment office collected for 3months he offered my job back in good faith. (NOT).Went back to work for him he would give me loads from yard to meijer in newport Mi with 2days to get there appt only for delivery. Yea these jerks are idiots alright and always will be.