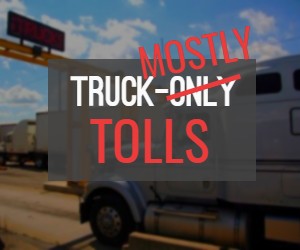 Connecticut’s governor seems to have backed off the idea of truck-only tolls for now. But in the new transportation plan he’s proposing, higher rates for trucks – especially out-of-state trucks – aren’t just a reality, they’re being used as a selling point.

Part of Governor Ned Lamont’s platform when running for governor was a truck-only toll that would help fund an infrastructure overhaul for the state. But a truck-only toll is legally dubious at best as Rhode Island’s lawsuits are proving, and the lawmakers he needs to push the legislation through don’t want to vote for an increase in taxes for their constituents so close to an election.

So Gov. Lamont’s new plan seems to be to get around calling it a ‘truck-only toll’ by collecting tolls from passenger vehicles as well, while keep commuters (and therefore voters) happy by making sure that the lion’s share of the tolls are paid by out-of-state drivers and truckers.

According to the CT2030 website, the plan would be to charge “user fees” that start at $.50 cents for cars and between $3.50 and $7.000 for trucks. Or as the proposal puts it, “the heavy tractor-trailer trucks that significantly wear and tear our bridges will pay seven times more than the base car rate.”

Additionally, the proposal assures CT voters that a large portion of the tolls collected will be paid by out-of-state drivers.

“Roughly 40% of those user fees [tolls] will be paid by out-of-state drivers, and still more will come from the heavy trucks that do the most damage to our roads,” said Gov. Lamont.

Lamont is hoping that if legislation is passed soon, construction of toll gantries would soon follow, and tolls would start being collected by 2023.

While no specific amount has been set yet on how much Lamont expects to raise in tolls, they are meant to fund $21 billion in spending on infrastructure improvements with the help of federal funding and loans.