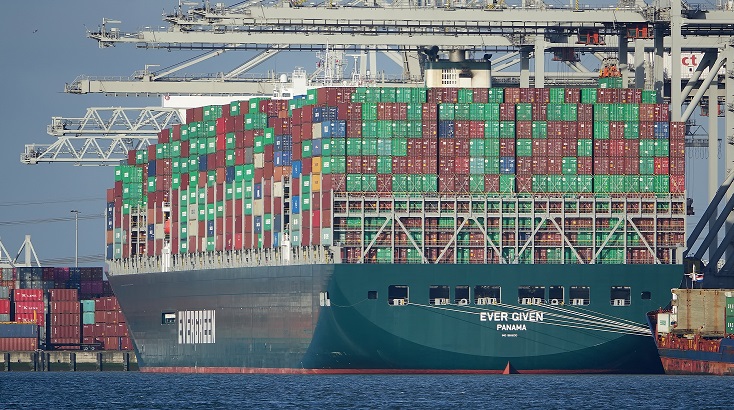 Picture this: a narrow 120-mile canal carved through a desert which sees dozens of skyscraper-sized container ships weighing hundreds of thousands of tons pass through it every single day. Now picture one of those massive ships taking a hard right turn where it shouldn’t. All those ships – and all those containers of freight – come to a halt.

The Suez canal in Egypt usually sees anywhere from 10% to 12% of all global trade pass through it. Ships going between Asia and Europe or the East Coast of the Americas can either go through the canal or around the horn of Africa. The trip around Africa generally adds 7-10 days to a one-way trip.

Now though, the Suez canal is seeing 0% of global trade pass through it because one container ship is stuck; lodged sideways across a narrow single-lane section of the canal.

The Ever Given ran aground during a sandstorm caused by heavy winds on Tuesday. At around 1,300 feet long, it is significantly longer than the canal is wide at that point, so the ship has actually run aground on both sides of the canal at once.

Crews in charge of digging the ship out say that it could be days or even weeks until it’s out. Until then, the almost $10 billion of cargo a day which is supposed to flow through the canal will have to find another route or just drop anchor and wait.

Analysts are warning that this could cause delays and even shortages of goods here in North America.

“Right now two out of three container vessels arrive late,” Lars Jensen, CEO of Sea Intelligence Consulting, told CNBC. “And when they are late, they are on average five days late. However, the longer this drags out, the worse it gets because you are then talking about effectively removing vessel capacity as well as containers at a point in time where they are already in short supply.”

All of this could mean domestic freight volatility. But what freight? According to Jensen, “basically anything you see in stores.”