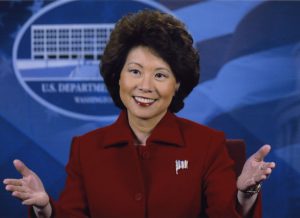 The 38-page investigative report was sent to the DOJ in December of 2020. It was the final days of the Trump administration and William Barr’s DOJ declined to prosecute. Just a few days later, Chao resigned following the Jan. 6th insurrection in the capitol.

No further investigation appears to be forthcoming. But the Chairman of the Committee on Transportation and Infrastructure Peter DeFazio said that Chao had engaged in “flagrant abuse of her office.”

The OIG report features multiple redacted sections, as well as what appear to be redacted names. The document was “redacted for public disclosure by the U.S. Department of Transportation, Office of General Counsel.”

Former Secretary Chao was investigated for “potential conflicts of interest and favoritism.”

The person investigating these alleged conflicts of interest, acting inspector general of the DOT Mitch Behm, was fired during the investigation. He was then replaced by Eric Soskin, who was reportedly chosen by the White House Counsel’s Office. This is highly unusual since inspectors general are government watchdogs and therefore traditionally non-partisan.

Secretary Chao is the wife of Kentucky Senator Mitch McConnell. There were allegations of favoritism after Kentucky received four federal grants totaling $125 million. The investigation “did not uncover evidence” that Kentucky was given an unfair advantage.

Similarly, an issue with financial disclosures was also not recommended for further investigation.

OIG did however recommend further federal investigation into – and potential criminal prosecution of – other allegations, including some actions taken by Secretary Chao and her father, James Chao. James Chao is the founder of a shipping company now headed by another daughter, Angela Chao. The company does a large amount of business with China and has reportedly received funding from China’s state-owned banks at favorable rates in the past.

In response to these claims, Chao’s office put out a memo titled “The Importance of Asian Cultural Values to the Success and Effectiveness of Secretary Elaine L. Chao” that appeared to accuse her investigators of racial insensitivity. It explained that “filial piety” was the reason for the unusual behavior.

“Anyone familiar with Asian culture knows it is a core value in Asian communities to express honor and filial respect toward one’s parents, and this ingrained value of love, respect, and filial piety always takes precedence over self-promotion and self-aggrandizement,” read the statement. “As the eldest daughter, she is expected to assume a leadership role in family occasions that honor her father and her late mother […] any suggestion to the contrary based on her background and support of her family ignores the diverse cultural fabric and values upon which our country is founded.”

OIG also recommended that the DOJ and U.S. Attorneys Office investigate Chao’s use of government employees for personal use. Just one example provided in the report is an email from Secretary Chao to a staffer who asked a question about one of her father’s Chinese TV interviews. It reads in part:

“I know nothing of details of [this] request [.] You must write me a memo and tell me details, etc. You must cc [OST staffer] so [they] can arrange questions/answers. This is a TEAM project!”

She also allegedly used employees and the weight of her office to secure visas to enter the country. OIG referred that particular information to the Department of Homeland Security for “any action they deem necessary.”

For a full accounting of the alleged conflicts of interest and violations, see the OIG report.

A spokesperson for Chao said in a statement that the OIG report “exonerates the Secretary from baseless accusations and closes the book on an election-year effort to impugn her history-making career as the first Asian American woman appointed to a President’s Cabinet and her outstanding record as the longest tenured Cabinet member since World War II.”