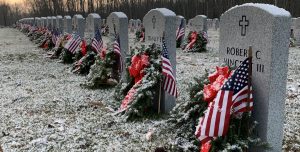 The pandemic has postponed or cancelled many things this year. Weddings, graduations, celebrations and memorials of all kinds. But one holiday tradition has continued on undaunted, just as it has every year. Wreaths Across America once again laid wreaths at the headstones of 1.7 million military veterans.

Wreaths Across America’s mission is to “Remember our fallen U.S. veterans,” “Honor those who serve,” and “Teach children the value of Freedom.”

By laying wreaths at the headstones of military veterans across the country, WAA makes sure that no soldier is forgotten. This year, volunteers working with WAA placed wreaths at the graves of 1.7 million fallen American servicemembers.

In a normal year, WAA would host statehouse ceremonies for people in almost every state. The WAA convoy to Arlington National Cemetery would stop at schools, community centers, scout groups, and more along the way.

In addition, special memorial ceremonies are held at Pearl Harbor, the Pentagon, Shanksville, PA – the location where United Airlines Flight 93 crashed into a field during the 9/11 terrorist attacks.

This year, in-person gatherings had to be kept small. But truckers still hauled the wreaths. Volunteers and their families still came out to lay wreaths. And ceremonies, services, and remembrances were live-streamed by those in attendance so that those at home could still participate.

To learn more about Wreaths Across America, to volunteer, or to donate, you can visit their website at www.wreathsacrossamerica.org