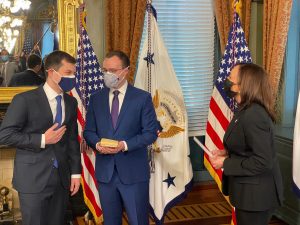 Pete Buttigieg was confirmed as the Secretary of the Department of Transportation on February 2nd. Focused on safety and infrastructure, Buttigieg says “it’s time to get to work.”

Buttigieg’s confirmation went smoothly and seemed like a sure thing from the beginning. Some Senators, like Nebraska’s Sen. Deb Fischer, used the confirmation hearing to try and influence policy rather than ask questions to determine his fitness to serve. Sen. Fischer asked that the livestock industry retain “the needed flexibility in their hours of service.”

Smooth though it was, Buttigieg’s confirmation broke down a few barriers. First, Buttigieg is the first openly gay person to be confirmed as a cabinet secretary. Buttigieg, 39-years-old, is also the youngest Transportation Secretary in U.S. history.

Today, I was humbled to swear an oath to serve our nation in this moment of challenge and opportunity, knowing that we now have a historic chance to take American infrastructure to a new level. pic.twitter.com/ik9jm4M4QP

Buttigieg’s lack of experience is been a point of attack for his opponents both during his presidential campaign and after. He is a Harvard graduate who studied as a Rhodes Scholar at Oxford University. He served as a U.S. Navy Reserve intelligence officer between 2009 and 2017. During that time he spent 7 months in Afghanistan and attained the rank of Lieutenant. In 2012, he became mayor of South Bend, Indiana.

“Mayor Pete” – as he has been called – will be at the helm of a DOT which has its work cut out for it. Both Buttigieg and President Biden have talked up the administration’s commitment to infrastructure. The “Build Back Better” program is expected to put somewhere around $2 trillion into infrastructure projects nationwide.