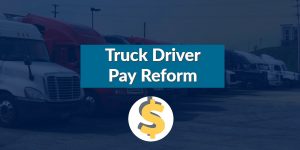 New guidance by the Department of Labor has made a small but important change that may have a significant impact on trucker paychecks. It has withdrawn previous guidance regarding whether or not truckers should get compensated for time that they are in a sleeper berth.

In 2019, the U.S. Department of Labor published a letter which set back trucker pay reforms significantly. The opinion letter stated that when drivers are not driving, that can be considered “nonworking time that is not compensable.” But as any trucker knows, just because you’re not rolling, doesn’t mean you’re free to do as you please.

DOL rules require that truckers – like all employees – earn at least minimum wage. When you split up a driver’s wages into the hours in that two-week pay period, which hours do you count as “work?” Prior to 2019, judges had ruled time and again that any time spent doing something necessary for the performance of your job could be considered compensable time.

Drivers were able to bring lawsuits against their carriers for paying them well under the federal minimum wage when all compensable hours were accounted for. On multiple occasions, megacarriers were ordered to pay members of large class action lawsuits back wages to bring them up to minimum wage retroactively.

DOL’s 2019 letter called that rule “unnecessarily burdensome for employers.” The legal opinion of the DOL was that hours spent in the sleeper berth during off-duty time should not count toward hours worked since drivers are “relieved from all duties.”

With the change in the White House has come a new cabinet. The new Department of Labor leadership has announced that they are withdrawing that 2019 letter. They noted in their announcement that the previous letter’s opinion had been contrary to previous judicial rulings. It had even been actively ignored by federal courts who called the argument “unpersuasive.”

While officially withdrawing the 2019 letter does not change any laws, it makes clear that the federal government stands firmly on the side of truck drivers on this issue. This could mean that the driver pay reforms that have lost their footing in recent years could be returning.