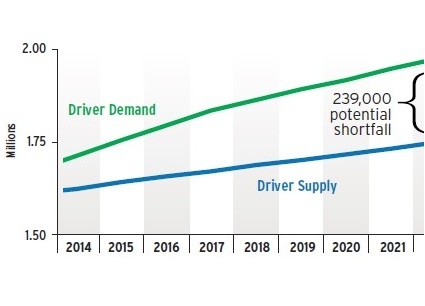 The ATA has long bemoaned the “driver shortage” that has left many rigs at major trucking companies sitting empty in a lot rather than hauling freight. According to the ATA in less than a decade the industry will be short approximately 300,000 drivers. While they acknowledge that this may be due in part to issues like CSA changes and Hours of Service regulation, they claim that two-thirds of the shortage will be caused by new industry growth and retirement.

“On average, trucking will need to recruit nearly 100,000 new drivers every year to keep up with demand for drivers, with nearly two-thirds of the need coming from industry growth and retirements,” said Bob Costello, the chief economist at the ATA.

Despite the ATA’s assertions that factors outside of their control are what’s causing a shortage of drivers, other experts seem to disagree. According to them, pay, equipment quality, and benefits like health services – all of which are controlled by carriers – would go a long way towards keeping drivers in their seats.

Dave Ross, managing director of the global transportation and logistics research group Stifel Nicolaus & Co, said that it is a question of pure economics. “If you pay them more money, you will get more drivers,” he said. “Our contention is that the driver pay right now for the industry is so far below market that a drastic increase is needed in order to attract anybody new. Increasing pay 5% is not going to solve anything. We think that driver pay needs to go up 40%-50% from where it is today to really attract anybody new into the industry.”

On top of the fact that better equipment quality is necessary for maintaining the safety of the driver on the road, Tyler LaBarge also points out that “trucks are in essence [truckers’] home on the road and so the better accommodations they have, the better they will feel.”